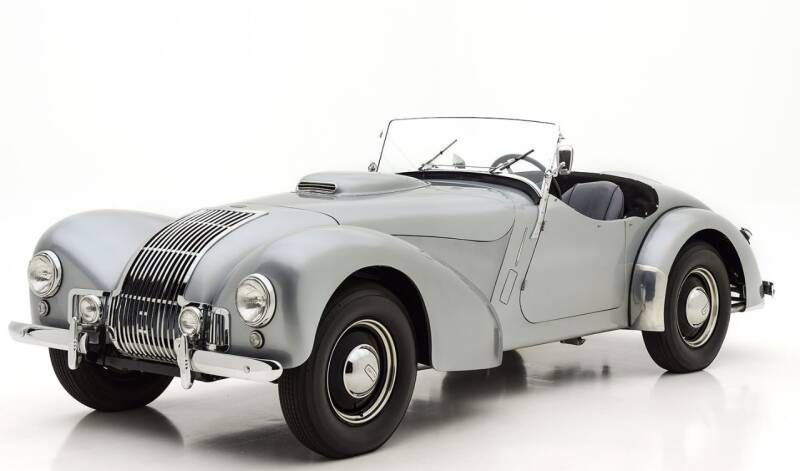 Mercury 59A Flathead V-8 close to 200 HP due to Overbore to 295 ci
3-Speed Manual Transmission
Stunning Quality Silver Exterior over Pewter Gray Interior
Recently out of a Private Collection where Previously Owned by Internationally Renowned Sculptor and Art Furniture Designer Wendell Castle with Amazing Pedigree, Documentation, now Offered to those Seeking Rare Investment Grade Vehicles
Believed to be the Only Example of its Kind, Ordered Directly from Allard by an American Enthusiast
With Comprehensive Documentation that Dates Back to the Original Order, the First Owner Ordered a New K2, with its Revised Styling and Improved Chassis. But Shortly Thereafter, the Order for the K2 was Canceled and he Instead Requested an Older K1 Allard Obliged, though the Car was Actually Built on the Superior Coil-Sprung K2 Chassis, and Fitted with a Specially made, Backdated K1 Bodywork
The Allard was Delivered in the States via John Forbes Agency of Boston, Massachusetts
Then Believed it was Disassembled and Stored in the Late 1950's, until it was Subsequently Sold in 1972
The Allard was Gradually Rebuilt over a 30 Year Period and, in 2003 was Professionally Restored to the State in Today
Sits Proudly on a Set of Black Steel Wheels with Correct Allard Dog-Dish Hubcaps and Period Correct Black Wall Bias-Ply Tires
Chrome on the Bumpers and Prominent Grille are in Excellent Order
The Leather is in Very Good Order, Showing only Minor Creasing from Use with an Inviting Patina.
The 4-Spoke Brooklands Steering Wheel was Replaced in July 2019, due to the Extreme Deterioration of the Original Plastic Rim Instrumentation is Simple and Tidy, with Original Smiths Gauges Placed in the Center of a Nicely Restored Wood Dash Panel Beautiful Edelbrock Heads and a Trio of Stromberg 97 Carburetors
Alternator has been Fitted for Reliable Running Day or Night, and an Electric Fan keeps Engine Temperatures in Check
This Attractive and Well-Sorted Allard K1/K2 is an Outstanding Choice for Vintage Rallying or Shows
Its Presentation, History and Bespoke Nature make it a Standout Even Among the Rarified Company of other Classics
Comprehensive Historical Documentation, Factory Documents, and a Selection of Original Tools
Fitted Tonneau Cover, and the Original Steering Wheel comes with the Bid
Wendell's Last car, Purchased in Oct 2017 for his 85th Birthday
When he Saw the Picture of the Car Next to One of His Sculptures, it Made Perfect Sense why he was Attracted to this Allard
Located in New York 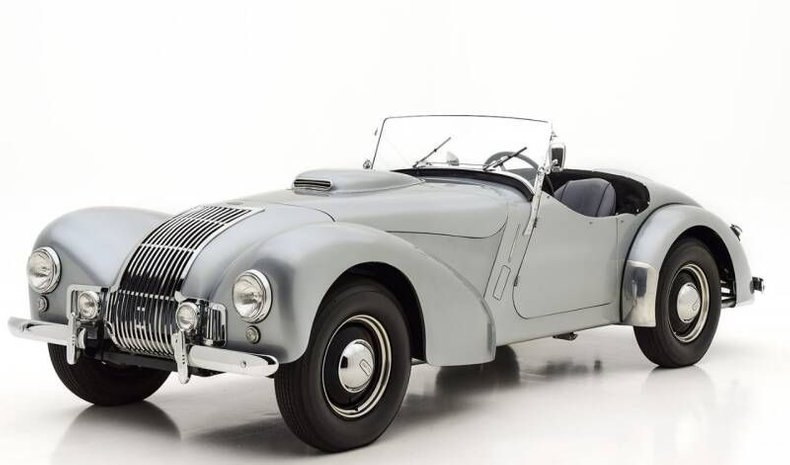 Scroll Here ↓
Swipe ↑
Thank you! We will be contacting you soon.
Powered By SpeedDigital